Check out CJ's story on the NDSAN website.
Posted by Miranda Galvin at 1:09 PM No comments:

Some people ask why do we need awareness?

Some people ask why do we need awareness?
- To be reminded how much your son is loved and that the impact is bigger than just the two of you.
- To see the light bulb get brighter and brighter!
- To smile as someone who "can't learn that stuff" leaves typical in the dust.
- To educate even just one is to impact the future.
- To watch motivation bring things to a whole new level.
- To observe "no point in even trying" hit it out of the park.
- To help one more person understand.
- To keep things in the present, looking towards the future.
- To know who is on the other end of the phone call.
- To know high expectations are expected and reached.

We are all more alike than different.
Posted by Miranda Galvin at 6:56 PM No comments:

CJ does not have all of the facial characteristics of Down syndrome, which leads to a two fold conversation.  For a good majority the idea that he has Ds doesn't come naturally and the awkward conversation centered around him not reaching milestones on time takes place. Once they realize he has Ds, the usual responses center on how he doesn't look like it, am I sure he does and/or he must not have it that much.
I have the genetic test results. He in fact does have Down syndrome; and outside of mosaic Ds, there are not degrees like there is of the doness of your steak. He has his mother's lips and if you really want proof check out one of my favorite parts of him - his Palmer creases on his palms. They make for sweet hand prints.
Running on CJ time usually does not lead for comparisons to fall CJ's direction, but everyone once in a while the comments of "you need to hurry up and grow as big as CJ" come along. Not bad for a middle of the standard growth chart kid ;).
Posted by Miranda Galvin at 5:49 PM No comments:

...but what about CJ

It is no secret that I have a soft heart and have a hard time saying no when Iowa Kids Net calls...unless of course, they call at 3am, then I find it rather easy to say no and no.
I know I am not the only person who gets questioned concerning the impact foster care has on my "real" child.  First of all, glad you consider him "real" in this situation, now if we could just work on  the concept overall...

CJ is social...I know it takes a lot to figure that out, haha.  He loves watching kids play and being around people.  In the past two months I have watched him light up on two separate nights - both when a surplus of people were around due to foster care transitions.  I have watched him figure out how to climb over babies on the floor, and stop to pat the baby on the back.  I have marveled as he entertained those younger than him and rock the empty car seat back and forth.

He has taught someone half his age to crawl and been motivated to get moving by another toddler.
Our lives would be very different without all of CJs siblings and I wouldn't have it any other way.
Posted by Miranda Galvin at 8:42 PM No comments:

As we sat waiting at one of our many appointments in Omaha today, I watch CJ play and interact with other children.  As they all played around each other, I noted how I could sit back and observe with no need to defend my child or explain his disability.  Though it may have had something to do with the specialized eye doctor's office we were sitting in, my hope and wish is that CJ continues to be just another kid for as long as possible.
One of the children playing in the waiting area had many similar physical features as CJ including skin color and hair texture.  As this young man brought toys to CJ to play with, I inquired how old he was.  To my surprise he was a month younger than CJ...and walking...and talking a few words...and carrying toys...and climbing up and down a chair...  In some ways I felt heartbroken watching the boy's advance development displayed before me.  (Also, I do believe this boy may grow to be very, very tall!)
I know, I know, on CJ's time and in CJ's way...still hard though!

Posted by Miranda Galvin at 7:39 PM No comments: 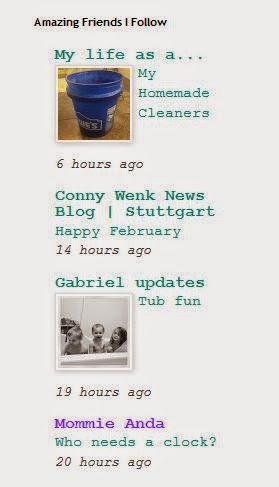 How cool is this?!  Sarah at http://sarahely8989.blogspot.com/ has the blog listed as one of the amazing friends she follows!!  I love following Sarah's sewing adventures.  Go check her out!


Posted by Miranda Galvin at 2:26 PM No comments:

Who needs a clock?


Who needs a clock when you are running on CJ time?  From desating on command in the NICU to getting his first tooth a year to the day of coming home; Charles James Galvin, named after his great-grandfathers and affectionately known as CJ, rolls at his own pace.
For Miranda Galvin in the summer of 2011, the idea of becoming a foster parent was placed on her heart, and about this same time her dream to adopt a newborn baby with Down syndrome also started.  As a special education teacher in Sioux City, Iowa, she was thinking more like when she was 35 or 40 and either was married or had decided to start a family without Prince Charming.  After completely foster care classes, and while waiting to get a call for her first kid, she signed up with the National Down syndrome Adoption Network.
Fast forward to November of 2013; Galvin is busy planning a birthday party for one of the two siblings in her care.  Thing 1, as the birthday girl is affectionately known as, enjoys going with Galvin to GiGi’s Playhouse in Sioux City where Galvin is heavily involved in the educational tutoring, playgroups and Down syndrome Awareness Walk operations of the Playhouse.
The morning after the cupcake birthday party, Galvin receives an email from Stephanie at NDsAN.  A baby boy had been born the day before, Thing 1’s birthday, and Stephanie is wondering if Galvin would like to be considered as a potential forever family for the little boy.  Not wanting to close the door on any opportunity in life, Galvin agrees but assumes a young, single gal from Iowa doesn’t have a chance.
Thirty-six hours later it is time to pick Thing 1 and her little brother up from daycare to take them to visit their mom for the weekend.  As Galvin arrives at daycare, she realizes she has a voice mail from Stephanie congratulating her as the new mom of the baby boy in Tampa, FL!  In the midst of a life changing weekend of preparations, Galvin heads to the Playhouse to work on a project day she is orchestrating to get the latest set of photos of smiling area children on the walls.  It is in the middle of just another morning at the Playhouse that Galvin shares she is officially a Playhouse mom.
Today, a morning at the Playhouse includes 14 month old CJ playing on the floor with his friends, while Galvin pauses to add another hat to her duties at GiGi’s, the one as mommy sitting on the couch catching up with her cherished friends, fellow moms.

Posted by Miranda Galvin at 6:02 PM No comments: